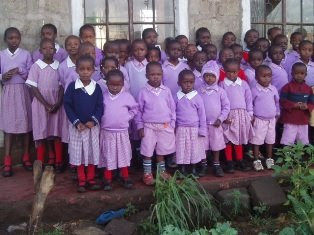 me (JCEPD) was founded in September 2004 by Sarah Wanjiku. She used to work as a teacher and could come across needy children whose parents died of HIV/AIDS and others who had no home. She started by sponsoring one child who was living with an elderly grand mother. She later housed more others who were homeless.Since 2004 Joy has grown humbly and it is now home to 21 orphaned or abandoned children & school to more than one hundred children.

Joy has the noble objective of ensuring the children enjoy a dignified childhood and grow into productive and confident citizens.

We are managed by a team of dedicated board members. Sarah as the executive director and vision bearer directs and oversees the activities at the orphanage. We are now housing 21 orphaned and vulnerable children. Our house school has a population of 155 pupils, some of who are needy children from the surrounding community. 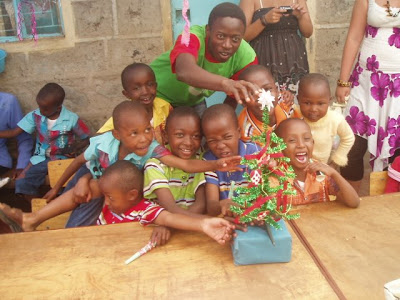 To provide holistic care for orphans.
This entails:

We are currently situated in Ruiru, Thika district in Central Province. We have permanent structures build on our own land. This has been made possible by well wishers who have donated money, building materials and even manual labour.

- Housing - The boys and girls require separate sleeping rooms since the one they are using currently is congested.

- Class five - Every year we require an extra class since the children are doing well and therefore promoted to the next class. Currently we have 3 rooms which we have partitioned into six classes i.e baby class, pre-unit, class 1, 2, 3 & 4.

- Toilet block - We are required to build a modern toilet block in relation to the population of the children.

- Staff support - We have six teachers, two house mothers and a gardener who all survive on a monthly upkeep allowance. 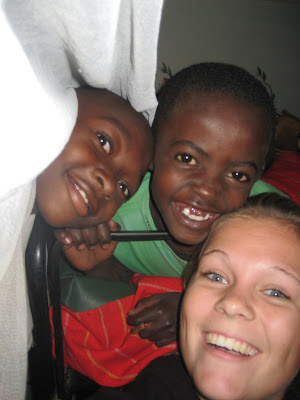 - Volunteership - We have had people from Denmark, UK & USA who have come and spend time at the orphanage and assisted in the daily activities. These include; teaching, washing, feeding and playing with the children.

- Consolidated fund - We have eight children in class four who are doing well. After four years time they will be in high school. We need a pool of funds towards their secondary education.

Our prayer is that:
- God will provide for the little ones
- Give us partners with whom to network and share the burden of this noble calling.

About the Director; Sarah Wanjiku

This is the story of Sarah Wanjiku, the Founder and Director of Joy Children's home in Ruiru,Thika, Kenya. 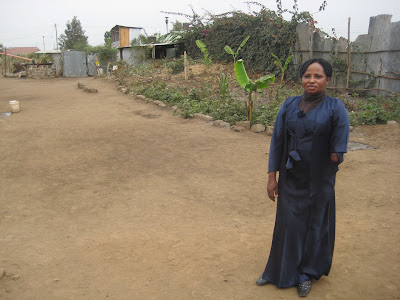 Mum Sarah is mother to 21 orphaned and abandoned children. She is also attached to another 38 children as well as mother to the Joy family. The 33 year old lady, whose presence is announced by this unpreventable inborn laughter, will always make you smile. At Joy Children's home, even those older than her cannot help calling her Mum Sarah.

Sarah was born into a family of 15 in Embu district (county) of Eastern Province in Kenya. Her parents struggled to feed and educate their children, living constantly with biting levels of poverty. Providing food and proper medical care were a struggle. That is how Sarah lived.
At the age of 2 years, she got sick with malaria. She was treated in a local dispensary which didn't have enough facilities. She woke up the following day with nobody to attend to her since her parents had to go to fetch food as usual.

That fateful morning she sat beside the three stoned stove to warm herself from the effects of malaria. Little did she know that she would grow dizzy from the heat and fall into the fire. She got badly burnt before anyone came to help. She was rushed to a local clinic and then to Kenyatta National Hospital, 200 km from Embu. She spent 2 years in the hospital and ended up with one arm being amputated. After the 2 years of seclusion in the hospital, she was taken back home to try and live a normal life. It was very difficult for her poor family, they had no resources for any special treatment for her. She struggled and even managed to go to school. 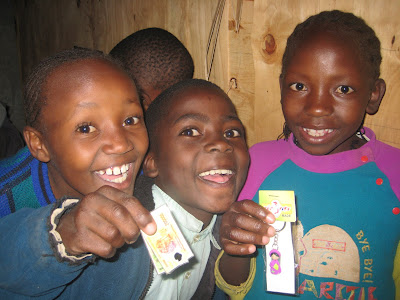 couple from America came to Kenya and by God's grace offered to support Sarah through a foster family programme. The sponsorship saw her through primary, secondary, and even college. Sarah later got a job as a teacher in the sprawling Mathare Slums of Nairobi where she was now staying.
Teaching in a slum was an eye opener for Sarah. She easily interacted with children who had no parents and counted herself blessed to have both of her parents.

All along she had desired to help a child by sponsoring one with her first salary, to perhaps give back a little of the kindness she received and change a life also. The opportunity came when one of her pupil's parents died of HIV/Aids and girl was left helpless. She used her salary to care for the boy who was now staying with an ailing grandmother.

There were many more deaths before the end of the year and Sarah's salary was not enough to support all these children. She shared the vision with her sponsor, Mr. Goodman, who offered to pay for a house in order for her to shelter the orphans. She rented a house and brought in about 10 orphans from the slums. Before long, the Joy house was full with 16 boys and girls. She never knew that what she had started was an orphanage. The government officials visited her and enlightened her on the need to register the home. This she did and continued with the good work. 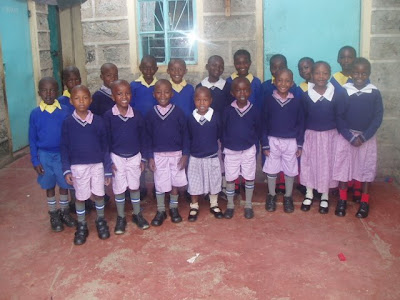 Mr. Goodman died in 2006 and soon the little support she was getting, was over. She struggled to feed the children with no income since she had resigned from her teaching job. In the middle of the struggle, more children joined the Joy family by either abandonment, like the 2 week old bundle found on the roadside, {Faith}, or by being brought in by ailing grandparents who felt that Sarah would offer their grandchildren a chance of a life which they could not.

Through many months of struggle at the rented premises, Sarah decided the only way forward was to get her own land. Early in 2008 Sarah acquired a quarter acre of land for Joy Family from her savings as a teacher. She had to walk around litterally calling on firm to firm, builder to builder soliciting for building materials. After three months of hard work she got enough for the roof and the walls and this made it possible for Joy to move from a rented place to the plot of their own. This is where the Joy Family lives now. The blessing came with another challenge - the need for a school.

Most of the children w 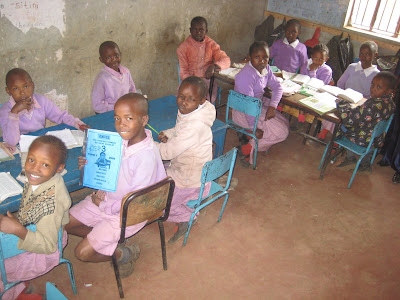 ere too small to walk the four kilometres to the nearest public school. The private schools nearby are so expensive such that even the majority of the children in the neighbouring community couldn't afford. Sarah's decision was that the shelter which is home to Joy Family had to be partitioned to provide a school. Sarah challenged the teacher in her to start some classes for her children. This saw the birth of an in-house school where the 21 children and others from the community attend. It has baby class, pre-school and class one up to four, all under one roof. Sarah's vision is to have classes for baby class up to class eight.

Joy has eight full-time volunteers assisting in the orphanage and the in-house school for some up-keep allowance. There are also other foreign volunteers who have come from Denmark & U.S.A.
All this happens under the able leadership of Sarah, a devout Christian & married to Jimnah Ngotho.
Her belief is in James 1:27: Pure and undefined religion... to look after orphans.
Posted by Sarah Wanjiku at 02:24 4 comments:

Sarah Wanjiku
Ruiru, Thika, Kenya
As a child I suffered from Malaria and fell into fire.I lost my left hand after two years of hospitalization.A good Samaritan offered to educate me.After college Worked in the slums of Mathare in Kenya where I encounterd needy children.I chose to assist the orphaned and abandoned children.That is how I started JOY CHILDREN'S HOME.MY BELIEVE IS IN JAMES:1:27-pURE AND UNDEFILED RELIGION...IS TO LOOK AFTER ORPHANS...